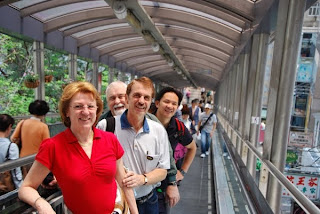 In the morning we caught the Star Ferry across to Central (HK Island) and starting trekking up the very very long series of escelators that would eventually take us half-way up to The Peak. On the way we stopped of for more markets, natch. 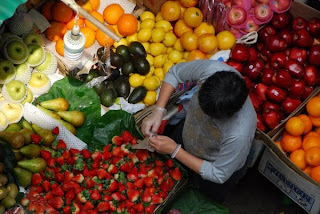 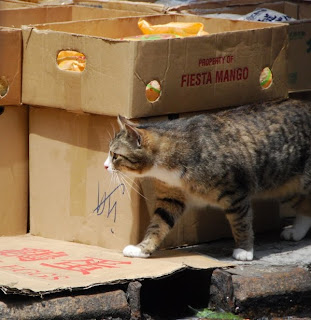 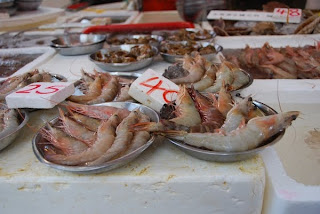 These prawns are ALIVE! I know this because one of them jumped ON MY FOOT
before attempting to scurry down the street!

These fish are also alive, which is a bit disconcerting, as they’re flopping around on dry land.
Very sad, but a common sight. 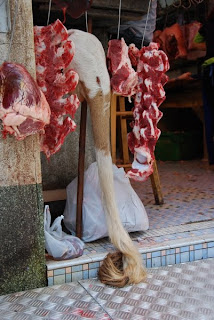 Also somewhat disconcerting, this cow tail with all the hair and tail bits still on it in the middle of the meat. I wonder if the buyers will find hairs on their steak?!

The escalators took us past people’s homes, giving insights into their lifestyles, and laundry. 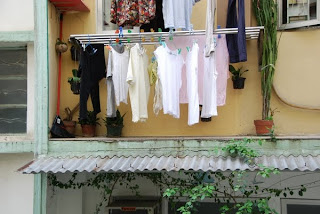 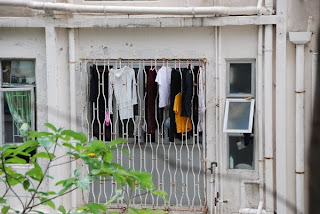 Once we scaled the escalators we took a tram-type thing up the rest of the hill (photos of how steep it is later, I took some goodies on our descent)
There is a little viewing platform there, unfortunately the view wasn’t great on that day, a big smog-y. 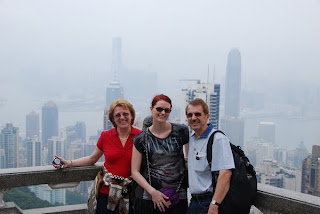 This is also the venue of the unfortunate bird poo incident… Walking to this viewing platform we heard the bird in the trees above, singing and flying around. Everyone was else was looking up trying to figure out what kind of birds they were. I said “don’t look up, they will shit on your faces”. About 5 minutes later I felt a big drop on my head!!! Bloody bird must have heard me and decided to get revenge for bad-mouthing him!! YUCK. Mum reckons it’s good luck, but I’m not so sure… After applying a ton of hand sanitiser to my head (thanks to Sarah for inspiring me to always carry some) we continued on our merry way.

We went back to the main building which has a viewing platform on top of it, and somehow we got a little better view up there. Annie, here is photographic proof that Horst came up there with us. (My uncle is not a fan of heights, for those not in the know) 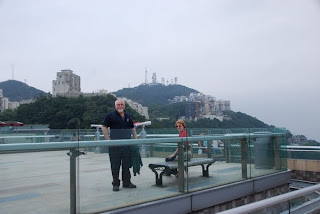 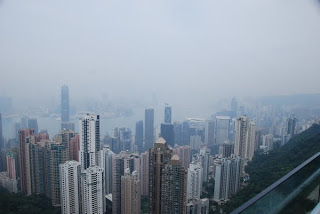 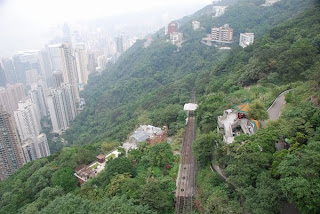 The view from up there is pretty unbelievable. It’s hard to fathom how many people live down there (~7 million in HK) in all those appartments. 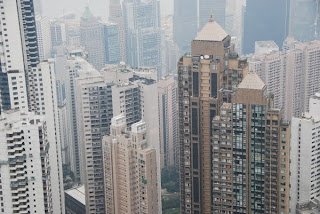 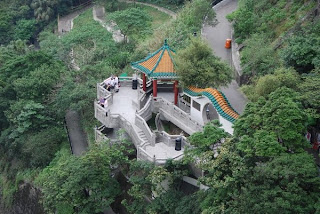 The previously mentioned viewing platform (of bird poo infamy) as seen from our new vantage point. 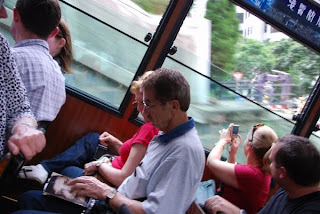 Going back down from The Peak, backwards. The tracks are probably on a 30 degree angle!
Once we were back down we caught a tram back to the Star Ferry terminal. I got into papparazzi mode with my 200mm lens: 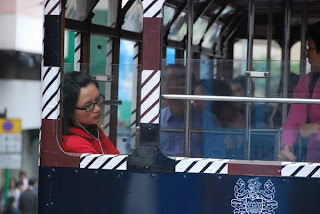 A bored commuter on the tram behind us. 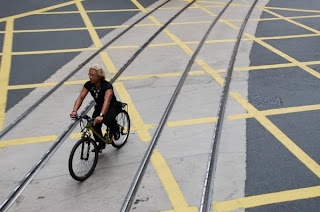 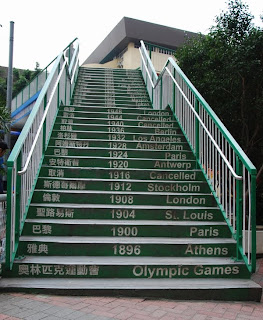 Not quite sure why, but there is a set of steps with every date and venue for the Modern Olympic Games so far. This was there even before the Beijing Games were announced.
After the Star Ferry trip back to Kowloon we made our way to the Intercontinental Hotel to celebrate my birthday with a high tea. The Interconti is right on the Harbour which is a beautiful view.
Unfortunately we were so hungry that I forgot to photograph the high tea set until after we finished the savouries (very yummy), as you can see from this pic. 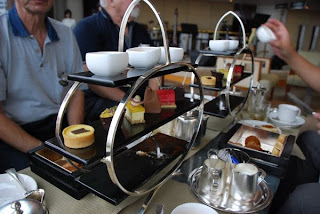 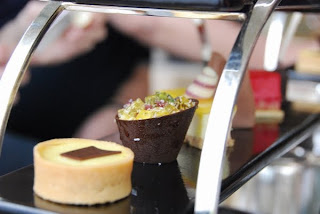 Hmm… yummy sweet things…
That night we went to the Temple Street Markets, boy, did I do a lot of shopping! I found some really nice leather clutches, which, after some haggling from dad (he’s the best, a tough negotiater) I got 2 for under 20 bucks! Bargain.
I also bought a lovely calligraphy scroll, photos in the next post.
Also thanks to everyone’s nice comments. Am glad to hear that it’s entertaining people, I will try to get some more posts done whilst away.
KKxx